There can never be too much communication during a major change. This has been shouted from the Change Management rooftops for a long time. As Change Mangers it is critical that when we communicate we CONNECT with our stakeholders.

But how can you REALLY get your messages understood by everyone? By incorporating these three tactics into your Change Communication strategy…

1/ W4H – Why before What before When before Who before How

There is a hierarchy in communication needs that must be met. Satisfying them in the right order increases your communication effectiveness.

Why – There is always a reason a major change comes about. The big picture sets the context for everything that follows. Sharing the reason WHY this change is being made is cruical.  When people do not fully understand WHY a change is happening, they can misinterpret all messages that follow. The “WHY” needs to be repeated with all the other W’s (and H) that follow.

What – Articulate the end game or final goal of what is attempting to be achieved by a change project. Then the phrase “eyes on the prize” gets a lot easier for everyone impacted because they know what they are striving for. Set expectations on the level of detail. “Here’s what we know and here’s what we don’t know.” It’s a great phrase that demonstrates transparency and increases your credibility.

When – Ensuring the end goal (as well as every step of the way) has a time frame associated with it — will also increase credibility. We all know that the WHEN can move as the project progresses but stating the probability of the WHEN with messages sets expectations that are both genuine and realistic. The further out the goal is, the less probable it will be achieved on that exact date/ time. Saying “We are 75% certain we will have our new office open in 6 months” sets a different expectation than saying “The new office will open at the end of August” – especially if the date has to slip.

Who – Everyone views things during a change from a WIIFM lens (What’s In It For on.. Me). Let people know who will and will NOT be affected by the change as well as to what degree they’ll be  affected. Once again, the certainty of this increases as the project progresses. Better to preface a message with “At this point here’s who will be affected by…” If there is a possibility this may change, say so. It’s better to be honest up front that things might change than to leave people wondering about every detail.

Marshal McLuhan was an academic that gave us insights into communications in the 20th Century that continue to resonate today. His famous quote “the medium is the message” tells us that the means we use to communicate influences the content we convey. This can also be extended to an individual’s personal style. Knowing your audiences’ different styles can shape your message content, timing and yes, medium!

Here’s a visual we use for shaping communications by style. 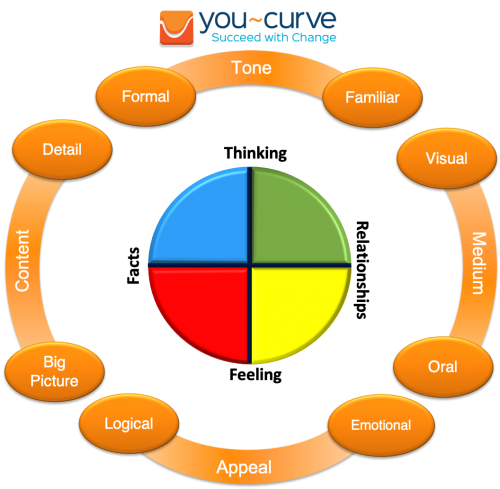 3/ Timing is Everything – The Stage of Change Influences Content

A person’s communication needs might change depending on their style but it also depends on what stage of the change a they are currently experiencing. Think in terms of the first emphasis of the W4H from above overlaid on the stages of the change curve. The diagram below illustrates which of W4H is of most importance. Note that at some stages there are multiple emphases to varying degrees. 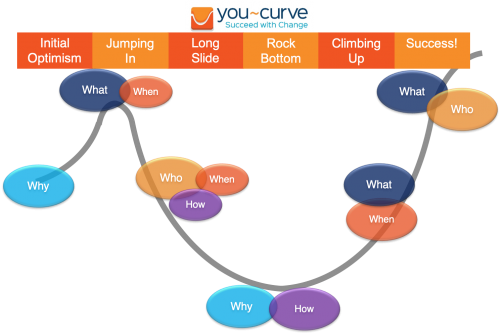